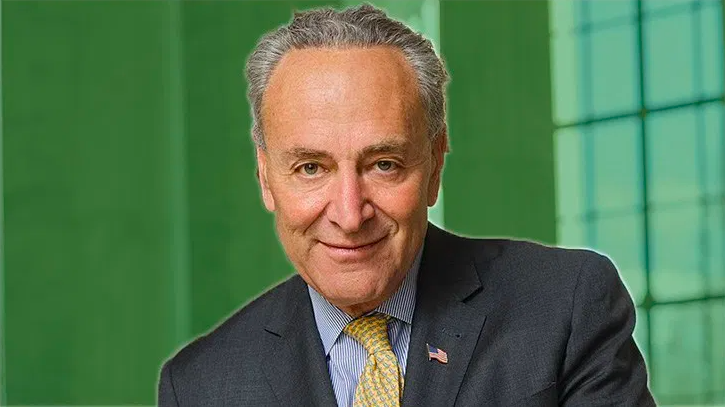 New York’s monumental legalization of adult-use cannabis this week has at least one federal politician thinking about when the United States will regulate the plant. Senate Majority Leader Chuck Schumer told reporters on Wednesday that, “I support decriminalization at the federal level, and we’ll be introducing legislation with a few of my colleagues shortly.”

With Mexico hovering on the brink of legalization, the United States is close to becoming the only North American country to uphold archaic cannabis prohibition laws.

The Senate majority leader dodged questions of whether he personally was in favor of federally legalizing the drug. “Decriminalization, legalization,” Schumer said when asked.

“At the federal level, you call it ‘decriminalization’ because that lets the states legalize,” he followed up.

Schumer’s obviously dodging the question. First of all, decriminalization and legalization mean two very different things to law enforcement — and the DEA — who will still likely arrest someone if they’re caught moving pounds of weed in a decriminalized landscape. We’ve seen this happen throughout recent history (even with psilocybin mushrooms in Denver after the city passed a decriminalization measure), even though “decriminalization” technically implies the removal of jail time. Arrests don’t always translate to jail bookings, however, but it’s never a positive thing when the cops know who you are or what you’re up to.

Further, legalization bars the possibility of pretty much any penalty, as long as purchases, sales, and cultivation are within the legal limits or done with proper licensing. Legalization also opens the door to a legal commercial industry. So, no — the terms are not interchangeable like that, Schumer.

Despite dancing around the question, Schumer wrote in a March fundraising email that cannabis legalization is a top priority.

“Voters in four more states this election voted to legalize adult recreational use of marijuana,” he wrote. “And that proves once again it’s past time to work to undo the harm done by misplaced priorities, particularly in Black and brown communities. It’s time to decriminalize marijuana nationally.”

In February, Schumer and Senators Ron Wyden and Cory Booker staged a meeting of cannabis advocates and industry folk to ponder what their federal legalization bill would look like.

The senators would like to avoid a repeat of last year, when the Marijuana Opportunity, Reinvestment and Expungement (MORE) Act failed to gain momentum in the Republican-controlled Senate after being approved by the Democrat-controlled House of Representatives.

Despite Democratic control of both houses, it is unclear if cannabis legalization will pass this year. On Tuesday, Jen Psaki, the White House press secretary, said that President Joe Biden’s opinion on marijuana legalization “has not changed.”

In the past, Biden has indicated support for rescheduling of marijuana, and the removal of penalties for the drug’s possession.

His Vice President Kamala Harris was a co-sponsor of the MORE Act, and in September promised in a town hall meeting that, “Under a Biden-Harris administration, we will decriminalize the use of marijuana and automatically expunge all marijuana-use convictions and end incarceration for drug use alone. This is no time for half-stepping, this is no time for incrementalism. We need to deal with the system.”

The White House courted ire in March when it announced that five staff members had lost their jobs when they admitted to consuming cannabis in the past. The president has indicated that his administration acted in accordance with policy — one that he’s not inclined to change until federal legalization becomes a fact.

Schumer’s similar declaration of support for advancing cannabis legalization in February caused cannabis stocks to rise. Analysts said they fell again in March due to apprehension over a legislative process that appeared to be stalling.